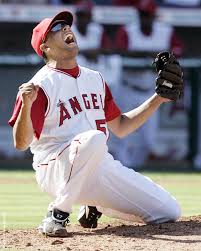 Star New York Mets pitcher Francisco “K-Rod” Rodriguez has been arrested after being accused of punching his father-in-law in the face, police said Thursday.

Rodriguez was charged with third-degree assault in the incident, which took place at the team’s Citi Field stadium Wednesday night.

The father-in-law was taken to a hospital with “an abrasion to the face and a lump on his head,” police said.

Mets spokesman Jay Horwitz referred questions about the incident to police, only confirming that it had occurred.

Rodriguez’s agent, Paul Kinzer, did not reply to a request for comment.

Rodriguez joined the Mets in 2009 after being a closer for the Los Angeles Angels of Anaheim. He has been named to the All-Star team four times.

Tagged as daddy issues, fuck you and your father, i can't feel my face, men who hate their in-laws, men who pitch, New England lifestyle, parents who just can't say no, plus sized latinas, steroids, wild card, you should have seen what he did to his wife.

2 responses to “Athletes who punch.”